For many years I believed that the only reason why you might want to slow your pooch down when he was eating was to avoid a potentially life threatening complication called bloat (gastric dilatation and volvulus, or GDV). Otherwise I thought that making a dog work for it’s food must be a frustrating and unpleasant experience for the dog.

But then I started to take more notice about what was being said in terms of canine enrichment (what is it for a start?) and why I (and every dog owner) should care.

Our domesticated pooches sure have come a long way from their wild ancestors. However, as much as we would like to believe they are almost part human and have adapted human behaviours and characteristics, the fact remains that, they are still dogs. Their “dogginess” still remains very much alive inside all of them.

There has been much work done in the fields of animal behaviour and welfare in terms of understanding the importance for animals to be able to express certain behaviours that are inextricably linked to their very being. Take for example pigs – we know that digging with their snout is at the very core of being a pig. And when such behaviours are limited or restricted, the wellbeing of the animal suffers. Similarly chickens, with behaviours such as dust bathing. It’s a behaviour that sits at their very core and when they are unable to express these behaviours their welfare suffers. Hence such public abhorration for factory farming practices, which prevent or restrict these and a myriad of other intrinsic behaviours

Our doggos are more or less the same. While I would not go so far as to compare factory farming practices with the life of a domesticated pet dog, I think we should still consider just what are the behaviours that are inherently “doggy”. What behaviours do they need to do express in order to satisfy all those little hormones in their brain that tell them everything is ok and life is good? Behaviours that have existed for thousands of years and have allowed the species to survive and flourish without human intervention.

A dog in the wild needs to search and hunt for its food. This means making good use of their noses and scenting. Physical activity is also a given. There is the capture and kill of prey, the search for water or other miscellaneous pieces of edible foodstuffs (duck poo anyone!). And then the actual eating process. While there would be some moments of scoffing, much of their feeding time would be spent working for their food. Licking, chewing, tearing, nibbling, digging.

Other than the obvious physical benefits that come from expressing their inherent behaviours, the mental effect of these behaviours is what I think is most often overlooked and underrated. Because outwardly “Fido” seems to be ok, we figure that we don’t need to worry about providing opportunities for these behaviours to be expressed. Or perhaps we don’t even think about it at all. So we are not being deliberately neglectful, it’s just never occurred to us that there might be something missing from our pampered pooches lives.

Have you ever taken notice of the zen like state that comes over your dog when he is chewing on a much loved bone or chew toy? It’s like a meditative practice. Just as entering such states can promote feelings of wellbeing and stress reduction in humans, it is likely that our furry friends also experience similar benefits.

So what does this have to do with slow-feeding? A lot.

By slowing down the consumption of food, we are allowing our pooches the opportunity to express some of their intrinsic behaviours. In more anthropomorphic terms, we are allowing the luxury of some “me time”. A time to think of nothing else but the task at hand, and also prolonging the amount of time being spent there. A mindfulness practice for dogs if you like. With that state comes the flow on benefits. Perhaps Fido is now a little less anxious. Perhaps they might bark a little less. Perhaps they might spend less time indulging in destructive behaviours such as excessive licking and chewing at their skin , or digging up the garden.

Like similar interventions in humans, its not some kind of miracle. You won’t start slow-feeding your pooch and see some kind of amazing transformation in their behaviour (or you might!). Rather it should be considered as just another arrow in your quiver of management strategies for your dog that will help them live a long, happy and fulfilling life. 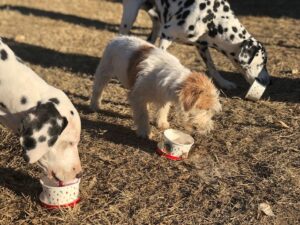